We're celebrating with darling Del Dryden today - and no, this is no April Fool's joke - on the release of her contribution to the 1-800-DOM-help series.
Del presents Roses and Chains...
Check out the awesome cover 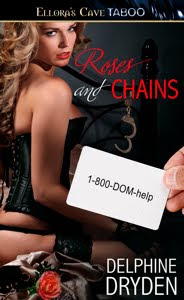 Take one adorable suburban couple just starting to realize their D/s relationship isn't quite enough to satisfy. Add one cute and quirky sub who can't seem to find a Dom to suit her tastes. Place them in a room full of sex toys and candlight, roses and chains...

After a few more smoking hot nights of pleasure and exploration, all three just might find what they're looking for.

It hurt to come, and Mara screamed again as the flogger continued to drum against her. She craved the feel of fingers or a cock or something inside her, and the climax ramped higher and higher and felt almost spiteful because it wouldn’t let her go and it didn’t satisfy.

Then there was a second sharp peak, and after it ebbed she finally achieved a resolution of sorts, a release that wasn’t quite the relief she had sought. But Amie pulled her down from the cross and into her arms, letting Mara weep into her honeysuckle-scented curls.

A few minutes later, Mara was seated on the floor next to Amie’s chair. As she dutifully finished off a bottle of water and plucked idly at one of Amie’s bootlaces, the Domme leaned down and pressed an unexpected kiss to the top of her former sub’s head. Then she handed her a business card. Mara took the card and stared at it for a moment before looking up at Amie.

“Somebody gave it to me. But I think you need it more than I do, sweetie. You’re just barely holding it together, aren’t you?”

Mara wanted to crumple the little white oblong into a ball and throw it back at Amie, but she knew her frustration wasn’t the Domme’s fault. It was her own. She looked at the card for another long moment before answering carefully.

“I’m sorry if I didn’t please you tonight, Mistress. It was very kind of you to—”

“Don’t. Don’t bullshit me. We were never like that.” Amie gave a sharp little sigh and pulled her ankle from Mara’s reach, then stood up and tucked a finger under Mara’s chin to force her eyes upward. Mara was too well-trained to jerk away, no matter how much she wanted to.

“Honey, we had a good time here in the club. It never worked outside, and we both knew that. But we gave it a good try, and I can respect that. What I cannot respect,” she said with a soft little faux slap against Mara’s cheek, “is a sub who plays passive-aggressive bullshit games, and won’t let herself get what she needs from the arrangement.”

Mara knew better than to apologize. She bit down on the automatic “I’m sorry” and nodded her head.

“I’m not sure what you need, Mara. And I don’t think you’re sure either. But there’s no reason to feel bad about that. It’s brave just to be out there trying. You don’t need to beat yourself up for not figuring it out faster.”

“Especially not when there are so many people who would be thrilled to do that beating for you.”

She couldn’t help but smile, and Amie grinned back, the million-megawatt, slightly evil smile that attracted subs from miles away. The prom queen has decided she wants to whip your ass…you’ll take it and like it, so bend over. Mara had been one of the first in line, and would never regret the experience.

But Amie really had been a popular former prom queen, and Mara really had been a disaffected, Indie-rock-listening, former Goth girl. And though they’d tried to find some common ground outside their scenes, it had simply never gelled.

“Mistress, may I worship your boot?” A groveling young man in a studded black leather thong had knelt down near Mara at Amie’s feet. It happened all the time, and Mara knew to just wait. She didn’t blame him. She felt much the same about Amie, even though they were no longer together and she wasn’t a boot fetishist.

This one made the mistake, though, of making a move before he had received permission. He was already leaning in, mouth open, when Amie spoke.

"Move that tongue any closer to my boot, little worm, and you’ll be thrown out of this club for a month.”

Then she turned back to Mara, ignoring the man, who was smart enough to squirm away without another word. He did whimper, however. He had almost certainly enjoyed the rebuke on some level.

“Pushy asshole. Look, just call the number. I trust the person who gave it to me. And I wouldn’t give it to you if I didn’t think it would help. It’s worth a shot, anyway. So be brave, okay? And I’ll call you tomorrow to check up on you.”

With another little pat to Mara’s cheek, Amie was gone, strolling away across the main floor of the club like the Queen of the Dommes, off to review her subjects.

Leaving Mara alone to consider the merits of calling the number on the little white card.

She looked at it again and frowned.

And we've got another release in the 1-800-DOM-help series. This one is from the multi-talented Kathy Kulig.

And check out this smokin' hot cover! 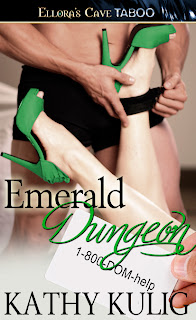 BLURB: When Dana, a harpist, gets a summer job in a medieval dinner show, she discovers a world of BDSM in the dungeon of the ancient Irish castle. Jack is a sexy Dominant who recognizes the submissive smoldering beneath the demure exterior. His skillful commands take Dana beyond her darkest erotic fantasies. Secrets and strange events around the castle strain their relationship, and the appearance of a mysterious business card 1-800-DOM-help offers to guide them. Only with complete trust and surrender is ultimate pleasure and true love possible.
EXCERPT: Over 18 only
“Look at you. You can't sleep on that. I’ll sleep there. You sleep in the bed,” Dana said.
“No. I’ll take the floor.”
“And freeze your ass off.” She took a breath and lowered her voice. “Jack, we’re not a couple of teenagers. I thought we were friends. We don’t have to have sex just because we’re in the same bed.”
He craved to hold her through the night, nuzzle his cheek against her breasts, curve his body against her round bottom, listen to her breathing while she slept. But to do so would be torture. To feel her close throughout the night without fucking her would drive him mad. If he had a D/s scene with her, he might be able to relax and get some sleep. He doubted he’d be getting much sleep.
He’d turned his back toward the bed, so he couldn’t watch her but she hadn’t crawled into bed yet. She walked across the room and at first he thought she was stirring the fire. Instead she came out of the closet with the flogger, straps and a rope.
She laid them out across the bed then walked over to him and knelt in front of the loveseat and bowed her head. “Please, Master. Show me. I want to learn. I want to understand why I was scared by watching Shannon and Damon and at the same time so turned on. I can’t bear the thought of leaving Ireland at the end of summer without understanding these feelings. Every time I think of them, I get horny.”
A knot formed in his chest. Oh, hell. She was a sub and didn’t even know yet. He’d have to take extra care with this one. It scared the hell out of him. She might realize this wasn’t for her and panic in the middle of a session. He didn’t want to do anything to hurt her. He’d never been with a sub who was so green.
She let out a huff, spun on her heels and marched over to the bed. She picked up the leather cuffs and started strapping them around her wrists. “Dana, don’t.”
She gave him a pained looked. After unhooking the cuffs, she yanked her sweatshirt over her head. The firelight made her smooth skin glow and he noticed her nipples were hard. Her breasts were beautiful. Not huge, but perfectly shaped. Struggling with the wrist restraints, she managed to secure them to her wrists with the short length of chain dangling between the cuffs. Picking up the flogger, she walked over to Jack and knelt before him again, head bowed and raised the flogger to him. “Please, Sir, I need to know.”
His breath caught as he gazed at her naked from the waist up, wearing his baggy sweatpants that barely hung on her hips. Far from the exotic fetish wear he would see women in at the club Unfettered, but so sexy. He stood and took the flogger from her. “You need to know what, slave?” It took a conscious effort to keep his voice firm and in control.
She let out a long breath. “I need to know if pain gives me pleasure.”
He closed his eyes and took a breath. Oh, hell. She’s definitely a sub. His cock twitched in response and rose to attention. Willing himself to remain in control, he pointed to the chair. “Get into your original position.”
“Yes, Master.”

BIO: Kathy Kulig is the multi-published author of sexy romances. Her recent works include Damned and Desired, a 2011 EPIC Award finalist, Secret Soiree and Dragon Witch. Her stories enter both paranormal and contemporary worlds. Critics have described her writing as “very raw and hot", "wonderfully unique” and “entertaining and captivating”. Kathy has taught workshops or participated on panels at Romantic Times Convention, NJ Romance Writers Conference, Romanticon and for other writers groups. Visit her online at www.kathykulig.com
Posted by Tarot By Arwen at 7:00 AM No comments:

So happy to share the latest release in the new 1-800-DOM-help series from Ellora's Cave. Take one mysterious business card, add an Operator and let the mayhem ensue. The magic is that the 1-800-DOM-help line, when called, will hook up a BDMSer with their other half. Of course, they don't know that when they call.
A Brigadoon-like club called Unfettered shows up but that's the end of the similarities in the stories. From M/M to menage, this series is turning out some hot, naughty erotica.
Next in the series is MISTRESS MINE by Samantha Cayto. These books are stand-alones so you don't need to read one to read the other. Of course, we hope that you will read them all. 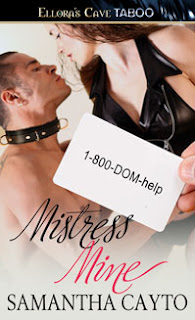 Blurb:
FBI agent and ex-military man Trey Boudreau likes to be in control and issue orders. But the bedroom is not a battlefield. His secret desire is to submit his body to a strong, older woman. He discovers a card that promises him the right one to bring him to his knees.

Juliette Coyne is a Domme determined to overcome a past experience that left her questioning her ability in the lifestyle. She is challenged by Trey, a strong, younger man in need of a good lesson or two. Old habits die hard, however, and the past continues to haunt them. Trey and Juliette grapple with each other and themselves for control, trust and a future together.


Visit Samantha Cayto's site to learn more about her and her other books.
Posted by Tarot By Arwen at 9:42 AM 2 comments: