Well, we took the plunge. Just got the notification that "we're officially entered" in the First Chapters contest at Gather.com

Ideas that just won't go away...

We all have them. Those stories that keep haunting us even when we know there is no market for them or that we’ll never sell them because they’re just too “out there” or have questionable elements.

Why can’t we let go of these ideas? Do we harbor the hope that at some point in the future we’ll be able to use that idea in some form or fashion in another story? Do we hang on because, like a bad relationship, we just can’t see a way to let go? What is it that drives us to keep pulling that tired idea out and revisiting it?

I can only answer for myself. Either I’ve just got to use that character somewhere or I really want to write that storyline. I’ll hang on to them until it has been definitively proven to me that their story will never sell or that no one “gets” that character.

There are a few of these floating around in my head and eventually they’ll be on paper – whether they’ll ever sell or not truly remains to be seen.
Posted by Cai at 3:53 PM No comments:

Inspiration can come from a picture, a song on the radio, an email we receive from a friend, and even from other writers.

Focus – if you can keep your mind on what you’re writing and not let something else interfere – whether that’s a new story idea or going off on a tangent with the current story, you’ve got it made.

Focus is sometimes hard for writers due to the fact that we DO see the world differently from non-writers. What is mildly annoying to someone else can give us fodder for a month’s worth of writing.

Discipline means BICHOK – Butt in Chair, Hands on Keyboard. That story won’t write itself! Discipline can mean writing SOMETHING every day (or night) or it can mean setting aside time during the week for a flurry of writing. Discipline will see you through to the end of the novel, even when you hit the wall and don’t know where you really want to take that story.

Inspiration, Focus and Discipline – yep, that’s what we all need to write, that’s what we can depend on to see us through, and what will get that novel written and eventually sold.
Posted by Cai at 10:05 AM No comments: 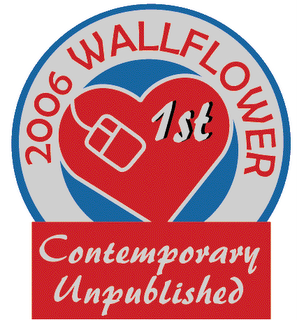 Look what we did! (big grin)

Our entry is titled "Brother's Keeper" and is one we've had on the back burner for some time...guess it's time to bring it to the front, huh?
Posted by Cai at 3:00 PM No comments: